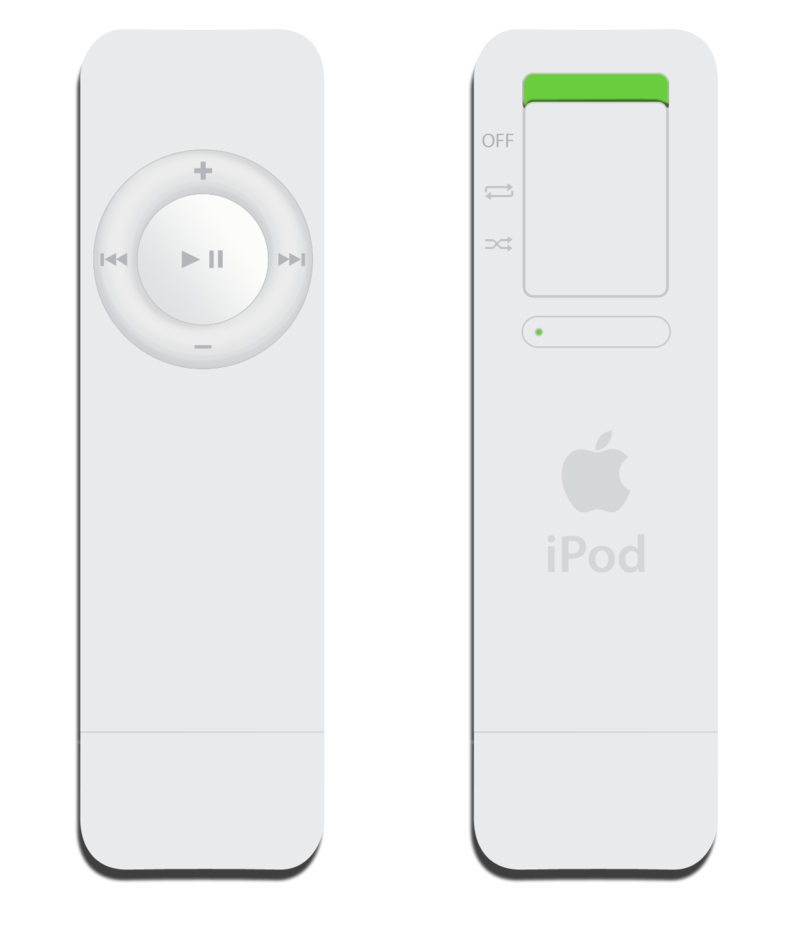 This review takes a look at the 2005 Apple iPhone Shuffle.

From my experience, “regular” iPods are too big and heavy to workout with. The iPod minis are better, but still a little bulky use while running. Thank goodness for the iPod shuffle, which weighs only 0.78 ounces and is literally as small as a pack of gum.

I have been using the 1GB version if the iPod shuffle, which holds 240 songs (measured at 4 minutes each, in the 128 Kbps AAC format). There is also a 512 MB version that holds 120 songs and is the same size and weight. It really is amazing that such a small device can hold so much music. However, if you want to store your whole CD collection, you should consider a regular iPod.

While the size and weight of the iPod shuffle is pretty incredible, the sound quality is even more impressive. The output is crystal clear, and has a smooth frequency response from 20 to 20,000 Hz. Of course, the sound is only as good as the headphones used with it and fortunately, the included headphones sound great. The white Apple headphones can go head to head with some of the best in-ear headphones in the $50.00 range. However, for running, I would recommend getting ones that wrap around your head or ears so there is less tension on the earbuds.

The shuffle also includes a lanyard (like a necklace), that attaches conveniently to the device so you can wear it around your neck. This is great for just walking around and listening to music, but it bounces around far too much to be used for running. Fortunately, there is an armband available for runners. When unclipped from the lanyard, the shuffle has a USB connector that connects to the USB port on your Mac or PC. The USB connection is used to both charge the internal battery and transfer songs to the shuffle. It can also be used to transfer other files from your computer, making it function just like a USB “keychain drive.” The battery lasts up to 12 hours, but expect a few hours less if you like to crank you music really loud.

The interface of the iPod shuffle is different than the other iPods mainly because, well, there is no screen. The front of the shuffle includes the familiar play/pause, previous and next, and volume up and down buttons. The volume can be controlled in surprisingly small increments, allowing for a very specific output level. On the back of the iPod, there is a flat switch that can be shifted to Off, Linear, or Shuffle. Linear mode allows you to play back songs in the order they were put on the device. This is great if you want to listen to an album with songs in the correct order or if you are listening to chapters in an audio book. Shuffle mode, of course, plays back the songs in random order. While the switch on the back is useful, it is hard to push back and forth since there is no grip on it. Fortunately, you don’t have to move the switch very often, but when you do, you better not have sweaty hands.

Overall, the iPod shuffle is a well-designed music player with impressive sound. It certainly sounds better than the other flash-based music players I’ve tried. There is no equalizer on the shuffle, but please, it weighs less than an ounce. The headphone jack can be used to connect to any speaker system or to a tape adapter in the car, meaning you can play your shuffle’s music just about anywhere. If you want a good quality, extra small music player that you won’t even notice you’re carrying, the iPod shuffle is the clear choice.